Digital Orthophoto is an image map produced by the SMO featuring pictorial information of ground features as contained in geometrically rectified aerial photographs, coordinate reference in the Hong Kong 1980 Grid system and a uniform scale of representation. With the use of digital photogrammetry technology, the rectification process applied to the original aerial photographs aims to remove the geometric distortions of the photographic images caused by topographic relief and camera tilt. The Digital Orthophoto is prepared in a style of conventional orthophoto, which implies that rectification for topographic relief has applied to images of ground, elevated roads and bridges but not any other physical features erected on them such as buildings or trees.

Currently, the Digital Orthophoto has four series of products, namely DOP5000, DOP1000-1963, DOP1000-1982 and DOPM50-L0, which are classified based on the sizes of image resolution and the types of source photographs used. They are stored in the image formats of GeoTIFF and JPEG with associated geo-referencing data in a World format.

The DOP5000 Series has an image resolution of 0.2m in terms of ground sample distance per pixel covering the whole territory of Hong Kong Special Administrative Region. It is compiled mainly from the recent aerial photographs taken at various flying heights (from 2,000 ft. to 9,000 ft). Unlike land areas, sea areas are not fully covered by aerial photographs. Therefore, some sea areas as shown on the DOP5000 orthophoto are produced by duplicating a similar image. The DOP5000 orthophoto is commonly used as a 1:5,000 map for general purpose by the architects, engineers, planners, developers, etc. It is supplied on tile basis and each tile is equivalent to the coverage of the corresponding 1:5,000 topographic map tile. A full set of the DOP5000 orthophoto has 192 tiles. It is provided in GeoTiff format on tile basis including a world file with geo-referencing data in Hong Kong 1980 Grid. The data file size of each tile is about 810MB. (see Map Reference and Data Updateness for latest information). 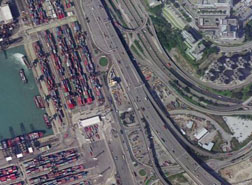 DOP1000-1963 is using mainly aerial photographs of an approximate photo scale of 1:8,000 taken at a flying height of about 3,900 ft. in January/February of Year 1963. It covers most of the Hong Kong land areas including the New Territories, Kowloon and Hong Kong Island except some places, including the border areas, Ping Chau and a few hill tops, where suitable 1963 aerial photographs are not available.

DOP1000-1982 is produced from aerial photographs taken in August, October, November and December of Year 1982 at flying height of about 4000 ft. Currently, It is partially covering Kowloon, Yuen Long, North, Tuen Mun, Tsuen Wan, Kwai Tsing, Sai Kung, Tai Po and Sha Tin Districts. This limited coverage is due to the inadequacy of 1982’s aerial photographs and areas covering Hong Kong Island, Kowloon Peninsula and Islands are under preparation.

Areas without suitable aerial photographs are shown in white on the orthophoto. For some ground features having a drastic change of elevation, e.g. a cliff, their images will have a smearing appearance due to insufficient data, which is a commonly encountered issue in producing a high resolution orthophoto.

DOP1000-1963 and DOP1000-1982 can be used for various applications requiring identification of old ground features. One common example is that it can be used as a survey map at a scale of 1:1,000 to supplement use of the original aerial photographs and DD sheets in conducting land boundary correlation exercise.

DOP1000 Series are supplied on tile basis and each tile is equivalent to the coverage of the corresponding 1:1,000 topographic map tile. Currently, two versions of the orthophoto are provided, i.e. the plain image version and the grid line version. 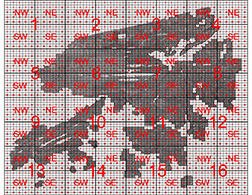 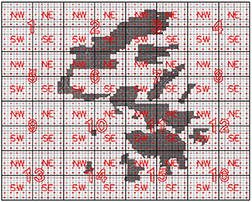 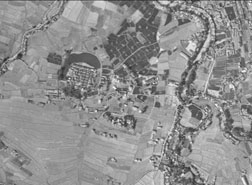 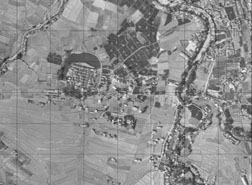 DOPM50-L0 Series has an image resolution of 5m in terms of ground sample distance per pixel. It is a softcopy of the paper-based orthophoto map OPM50 Series showing the whole territory of Hong Kong in one single image with grid lines and text information maintained. It can be used to produce a print of the original orthophoto map or served as a small scale map for general purpose. 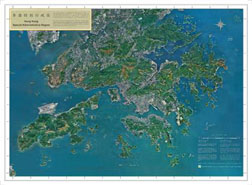 The three series of Digital Orthophoto are all available for sale to the public (see Ordering and Data Charge for details). Their product specifications are as follows:

Download Sheet Index of:
(All the following document files are in PDF format)